Salesforce.com was launched in 2000 and one of the key marketing strategies was a “No Software” protest. It took six years to offer developers a way to customize the platform. Even then, the only method of customization was to use single JavaScript files called S-Controls. The introduction of Visualforce and Apex in 2008 was only a slightly better way to access the platform programmatically.

The multi-tenant architecture that made the Salesforce CRM so attractive to business people, did nothing to entice software developers. They saw Salesforce as a “walled garden” that was just full of annoying limits, along with out of date testing and deployment methods.

This perception continued even after Salesforce introduced the Lightning platform in 2015. Chained to a bloated JavaScript framework called Aura, Lightning components were spectacularly slow to render. Worse than that, they were supported by antiquated development tools.

Salesforce executives knew they had a problem. To address it, they made key decisions to reverse direction and also attract “serious” software developers. In this post, I will look at a few of those decisions, and some of the open source projects Salesforce is working on today.

Salesforce has always embraced a strong culture that it referred to as the “Ohana”. Unfortunately, software developers were more like second class citizens in this culture. That began to change significantly in 2016 with the introduction of Salesforce DX (Developer Experience).

Salesforce DX is a set of tools, centered around source-driven development. It’s introduction was spearheaded by former Microsoft and now former Salesforce employee, Wade Wegner and is part of a campaign to win the loyalty of developers. The momentum continued after Salesforce released the Salesforce Extensions for Visual Studio (VS) Code as open source on GitHub. 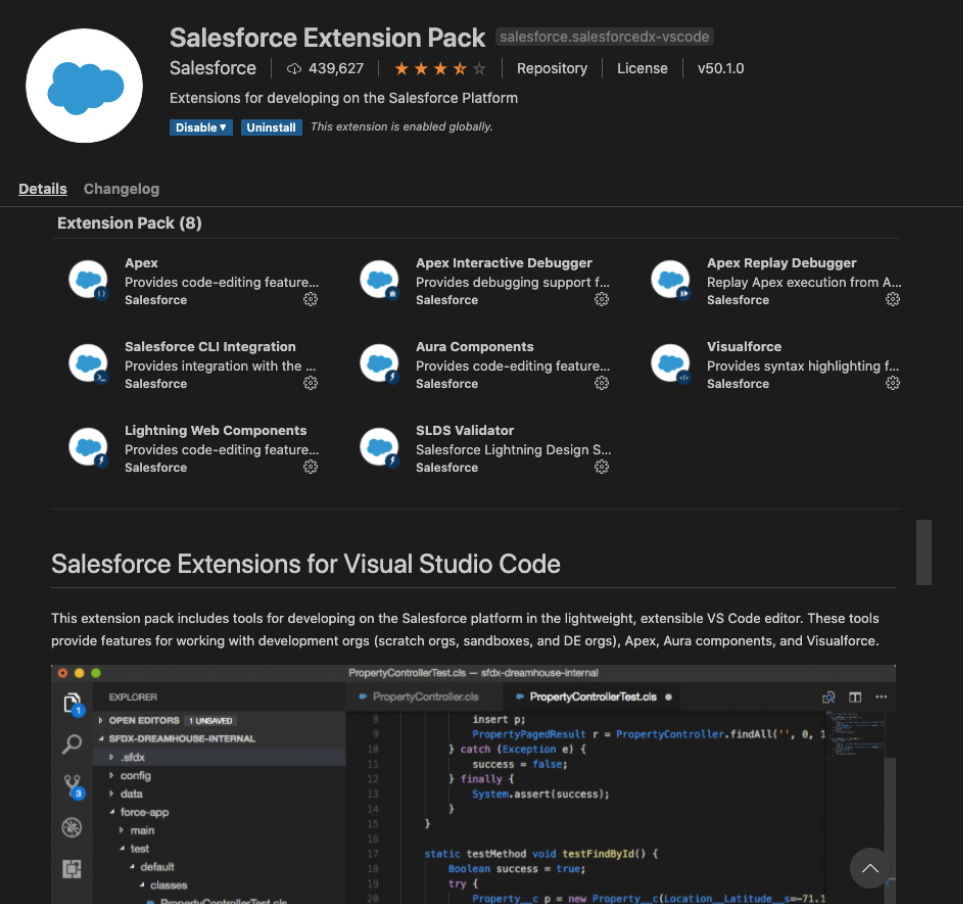 Unlike the rest of Salesforce, the VS Code extensions are updated every week. Salesforce actively adopts pull requests from community members, which includes feature requests and bug fixes.

The Salesforce DX features have also continued to grow. One of the most significant was the ability to develop on a local development server. Finally, developers can disconnect from Salesforce servers to develop Salesforce DX projects faster. This has improved even more so recently with the release of Change Source Tracking.

To address performance problems associated with Lightning components, Salesforce hired another former Microsoft employee, Kevin Hill to lead the effort of creating a new programming model. This resulted in the introduction of Lightning Web Components. It also involved renaming the original Lightning components as Aura components.

In an effort to secure the future of Lightning Web Components, Salesforce developers have become contributing members of the Ecma International Technical Committee 39 (TC39). This committee is directly responsible for controlling how JavaScript works in all browsers. Salesforce is also a member of the World Web Consortium (W3C), which controls the working group responsible for the web components standards.

Utilizing web standards has not only resulted in huge performance gains, but it has also excited developers of popular frameworks, such as React, Angular and Vue. These developers quickly discovered that developing Lightning Web Components was instantly familiar to them.

Salesforce did not stop there in trying to draw in more of these serious front-end developers. They have continued to offer up more of their software as open source. Even source code for jewels such as lightning base components are available on GitHub.

To help developers get up to speed quickly, Salesforce developer evangelists have created a Sample Gallery. The gallery features several real-world type applications that are updated on GitHub with every new Salesforce release. Each application showcases how to utilize Lightning Web Components, along with the latest available Salesforce features and best practices.

The latest addition to the sample gallery is the ECars sample car sales and service application. The customer facing application demonstrates the portability of Lightning Web Components and can be deployed on Heroku as a microservices application. It also features a Postgres database and uses Apache Kafka to handle incoming car diagnostic requests.

Continuing with the Developer tools momentum, Salesforce has a few initiatives in beta and closed pilot.

Salesforce functions (in beta) will eliminate many of the pain points that currently exist when trying to integrate Salesforce apps with different languages and libraries. Developers will no longer have to create a separate app on platforms like Heroku. They will also not have to configure a Salesforce connected app and develop lots of code to communicate with REST API’s. Nope, all of that can use Salesforce functions to embed scalable communications directly inside of current apps.

Code Builder (still in closed Pilot) brings Salesforce Extensions for Visual Studio Code to the web browser. Everything you need to build powerful Salesforce apps is built right in. This not only includes a connection to your Salesforce org, but Git integration and productivity tools like ESlint. Unlike the wildly unpopular Developer Console, this online development tool will be a true modern developer experience.

Salesforce’s biggest roadblock to innovation is the same thing that brought it success decades ago. The legacy multitenant architecture that is tied to application and database core services can best be described as limiting. Salesforce is actively working to replace many of the platform services with microservices, but this is a work in progress.

Salesforce has certainly made a lot of progress in bringing down the walled garden. However, they are playing catch-up to big Industry players like Microsoft, Google and Amazon. Only time will tell over the long run how their new offerings fare.