When I began my programming career, Visual Basic (version 3.0) was just emerging as a popular alternative for creating Windows-based applications. Ironically, it was a component-based approach to development that brought forth an army of programmers developing third-party components. Programmers could quickly spin up applications by simply dragging and dropping components onto a form design surface and then wiring everything together with events.

Visual Basic grew in popularity and for a few wonderful years, it was the hot new kid on the block. It brought about a sort of programming renaissance and lowered the barrier to entry for many up and coming developers.

Of course, the reign of Visual Basic was not meant to last. No programming language (or platform for that matter) stays golden forever. In 2002, Microsoft launched the object-oriented successor to Visual Basic called VB.NET. I can remember being so excited when it was released and I dove head first into learning all about the new Framework.

I have a confession to make. In all my excitement over the introduction of the .NET Framework, I hurriedly convinced one of my clients to let me rewrite one of his VB applications using VB.NET. Unfortunately, I made a mistake that many developers at that time did. I assumed that rewriting an application like this would be a simple conversion process. That I would just go in and simply swap one set of code for another and magically everything would work wonderfully.

That did not happen. In fact, the application I rewrote started to fall down in production almost immediately. It experienced huge performance problems. In short, it was a disaster. I had actually taken something that was working quite well and turned it into soup.

The problem was that VB and VB.NET were so fundamentally different. Design patterns that worked well in VB, failed miserably in VB.NET.

What I should have done was to start slowly.  Rather than try to convert an existing VB application to using the new .NET Framework, I should have looked at what I needed to do to make the .NET application perform well from the very beginning. I should have learned about best practices and really understood how different the new object-oriented approach to application design would be.

Eventually, I did do all those things, and also switched to using C# (which is much better imho), but only after I messed up my poor clients original VB application. Live and learn, I say. No one is perfect and we all make mistakes. The trick is to learn from them.

I feel like I have learned from mine. But the funny thing is that I can see a familiar pattern emerging now in the world of Salesforce development. I can see how the introduction of the Lightning framework will bring about some of the same challenges for Salesforce developers transitioning from Visualforce as there was for Microsoft developers transitioning from VB to .NET. 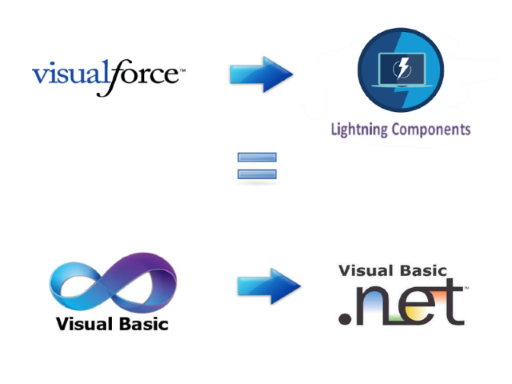 Of course, Visualforce is not going away anytime soon. But, anyone that believes it will not go away eventually is just kidding themselves. Salesforce is firmly committed to Lightning and it is no doubt the future of Salesforce development.

So, what should you do if you are a Salesforce developer that knows a lot about Visualforce?

You should embrace the new Lightning development framework and seek to understand how it differs from traditional Visualforce development. It really is like comparing apples and oranges. Begin by checking out this excellent Trail called Applying Visualforce Skills to Lightning. It helps to warn you about some of potential pitfalls you may encounter.

Just like with VB and .NET, design patterns that worked well in Visualforce, will fail in the world of Lightning. You could easily make an application perform worse if you just attempt to swap one set of code for another.

And so this is a good time for me to tell you about a new course I just started to design for Pluralsight. It will be titled Lightning Component Development Best Practices and I hope to release it before the end of the year.

And stay tuned because I will be covering many best practice topics (such as this one about Conditional Rendering in Lightning) on this blog in the months to come.

I recently had the opportunity to redesign a very small web application that was used to display residential housing statistics. The previous application was created over 10 years ago and as you can imagine, now leaves a lot to be desired. It was an ASP.NET application that used many post back operations to render charts using a very limited 3rd party charting tool. It performed slowly and lacked a lot of the key functionality the client wished for (namely the ability to display data for multiple subdivisions within the same chart).

My mission was to create a new ASP.NET solution that performed well on all devices (as this is critical for a web applications success), and was easy to use, yet delivered as much information as possible on a single page. After much consideration, I decided to use the Google Charting API to render the charts. Google Chart tools are simple, free and interactive.

I also utilized Bootstrap to create a modern and responsive design and JQuery to enable a fast and asynchronous user interface. Since this post is titled, “Google Charts and ASP.NET”, I will only focus on the code used to render the actual charts. The solution (as seen below) is what I ended up with.

As this is a technical blog, I will now share with you some of the code used to create this solution. The amount of HTML markup used in the ASP.NET page is actually quite small. The code that is used to render the Google Charts is created dynamically in server-side code and is written back to the web page inside of individual div blocks for each data metric.

To use the application, the user selects a subdivision using any one of the four criterias provided (Parish, Area, City, or Zip).  If the user selects a certain value (for example, “East Baton Rouge” as the Parish), then JQuery and an Ajax call is used to populate the subdivision select box with only the subdivisions for that parish. The user can add as many subdivisions as they want and once all the charts are rendered (which takes only a few seconds), they can flip between each data metric by selecting one of the tabs across the top.

When a user clicks the “Add a Subdivision” button, a server-side call is made to a method which collects all the search criteria and then passes this off to a function called renderChart in a class called Chart. The code (which is seen below) will call the renderChart once for each data metric displayed and will return a string that contains the JavaScript code needed to render that particular Google Chart.

Each time a subdivision is added to a chart, it is also added to a Subdivision List stored in the HTTP Cache. Since it is possible for the user to click Add Subdivision more than once, without changing what subdivision is selected, we want to prevent the same subdivision from being added to the cache multiple times. The following code is the first thing executed in the renderChart function:

The next thing to do is to get the data used to render the charts. The renderChart function makes a call out to one of two other functions (either GetSqlDataForMultipleSubs or GetSqlDataForSingleSub) within the Chart class to do this. The code below, which returns a DataTable shows this:

The last thing to do is to loop through the data in the DataTable variable named dt and build a string that will be returned by the function. The code below will accomplish this:

The end result for a call to renderChart will be a string of JavaScript code that will be written back to the HTML page inside of one of the predefined Literal placeholders. For example, a call to renderChart in which there are no other subdivisions in the cache and the search criteria was Parish = “EBR”, Subdivision was “Broadmoor East” and time frame was “5 years”, would produce the following output for just one of the data metrics (in this case the AvgPriceSqFt):

I really enjoyed working with Google Charts and found it to be very lightweight and flexible. I did not find it necessary to use the Google .NET Wrapper to work with it and ASP.NET. In fact, I will do a separate post about this since it will take a while to go into why this is the case and this post is already too long.

Hope this helps someone. I will try to save all the code to files and post links to them in the post later.