It’s ok if it does. Most people – even the ones that “know” a thing or two about artificial intelligence are a bit nervous about it right now. Not only is there a lot of uncertainty, but there is just an over abundance of information out there. And not all of it is accurate.

So, if the subject makes your head spin and you would like to know the answer to these questions:

“What exactly is Artificial Intelligence?”

“How will it make my life better?”

“Where can I learn more about it?”

Come check out one of my two Dreamforce sessions titled, “How to Embrace Artificial Intelligence” 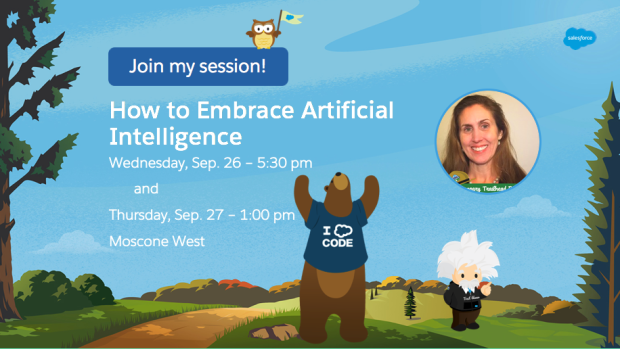 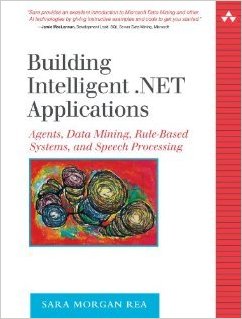 It is hard to believe, but it has been 11 years since my first book,Building Intelligent .NET Applications: Agents, Data Mining, Rule-Based Systems, and Speech Processing was released.

In that book I introduced the term “Enhanced Computing”, to identify software programs that utilize AI-based technologies to improve and extend traditional line of business applications. This was actually the whole premise of my book. Unfortunately, the term Enhanced Computing never really caught on, but a lot of the technologies I wrote about in that book have continued to advance and show great potential to dominate the technological landscape of tomorrow.

One thing I found interesting is that in my book I also wrote about something called the “AI Effect“, in which people observed that once a technology becomes widely accepted it is no longer associated with AI. Most recently there has been an explosion in the media concerning IOT (Internet of Things) and machine learning. Both of these concepts are firmly grounded in AI, yet you rarely see AI mentioned when referencing them. AI Effect? Must be, I think.

I was very excited to see this article about What’s Next in Computing?, in which the author goes into great detail about how we are poised for another technological revolution in which he predicts that we may have finally entered the golden age of AI.At the forefront of that is machine learning (or Data Mining as I refered to it 11 years ago).

Machine Learning and the use of Neural Networks has long been of great interest to me so I was particularly pleased to see this recent article, The cloud is finally making machine learning practical. Even though the article focused on machine learning using Amazon Web Services algorithm’s and Microsoft’s Azure machine-learning service, I see no reason why the same things could not happen on the Salesforce platform.

After all, with the recent release from Yahoo of their News Feed dataset, which is a sample of anonymized user interactions in the news feeds and is over 1.5 TB (that’s right, Terabytes) in size, all sorts of things may be possible for researchers independently exploring deep learning techniques. Especially those fueled by the cloud (hint, hint, wink, wink).

There have also been many advances in image recognition, due to other advances in deep learning, which have suddenly thrust AI more into the mainstream. In this recent article on Why 2015 was a Breakthrough Year in Artificial Intelligence, a Google researcher states, “Computers used to not be able to see very well, and now they’re starting to open their eyes.”

In fact, just this week Mastercard announced it is offering a new security app that allows people to take a selfie in order to confirm their identity. It is called, “Selfie Pay”. Way Cool!!! I am pretty sure that one is going to take off soon.

EDIT on 2/29/16: And then, there was this announcement several days after I wrote this post that Salesforce acquires Machine-learning Startup PredictionIO. I am sure they just read my post and the hint, hint, wink, wink part and that is why they purchased them (LOL) Just Kidding, but talk about timing, eh?

So, here’s to the future of <whatever it might be called next>!!!